It's the 5th week of October which means it's Wild Card Week over at Just Us Girls.  Angie is the hostess and chose to use Word Die-Cuts.  Easy peasy! 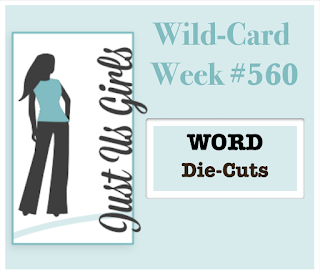 I just purchased this cute Thanksgiving gnome at my LSS yesterday.  He's so cute!  There are two others in the set, so I'll be making lots of Thanksgiving cards.  I started by stamping him and coloring him with copic markers then die cut him with the coordinating die.  Then I used a fall leaves layering stencil to create the background using several distress oxide inks.  For the challenge, I die cut the sentiment three times and stacked them for dimension.  I also die cut two rectangles from brown cardstock as well the stenciled background.  I added shimmer to the word and gnome and copper crystals. 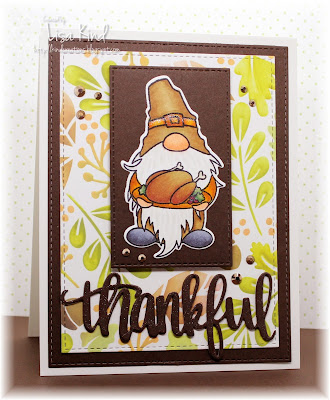 Hi friends!  Nancy chose a really great picture for our Just Us Girls Photo Week challenge.  I just love the colors and design! 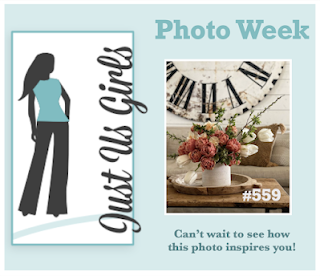 I pulled out some Altenew products to create this card.  I started by die cutting the vase from some ivory cardstock then used frayed burlap distress ink and a blending brush to get the texture look similar to the vase in the photo.  Then I stamped the pink flowers and made a mask for it.  I put the mask over the flowers and stamped the fern in spruce ink.  This was a second generation stamping because I wanted the color to be lighter.  I adhered the vase to the panel that was die cut with a stitched rectangle die.  The mat panel behind it was created the same way as the vase and also die cut with a stitched rectangle die.  I added clear sequins to finish it off.  The sentiment was die cut three times and stacked. 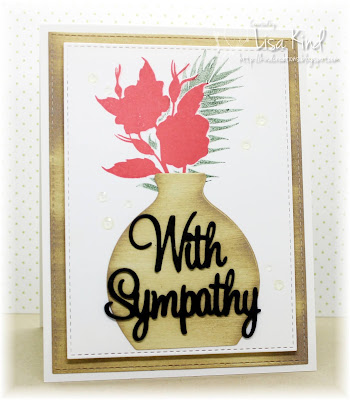 Hi friends!  Time Out has a photo inspiration challenge this time around.  It's a lovely photo that I'm sure will have many interpretations. 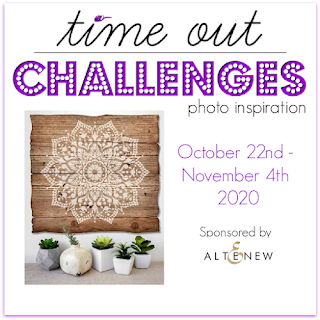 Mine was somewhat literal.  I watched a video that Jennifer McGuire did recently.  She called it Die Cut Letterpress.  Here's the process.  I die cut the snowflake three times from white cardstock and once from vellum and adhered them together.  Then I inked the vellum side using a blending brush and walnut stain distress oxide ink.  I placed the snowflake face down onto Tim Holtz watercolor paper and ran it through my die cut machine with a rubber mat.  (I did spritz the watercolor paper a bit before doing this to make it more pliable.)  This causes the die cuts to make an impression into the watercolor paper as well as transfer the ink.  The vellum keeps the ink wet so the transfer is easy.  I die cut the sentiment twice from white cardstock and once from the woodgrain pattern paper and layered them together.  That was adhered under the snowflake.  I die cut the woodgrain pattern paper and adhered that to the card base.  The main panel was adhered with craft foam.  I added the bronze crystals and some star dust stickles on the small openings of the snowflake. 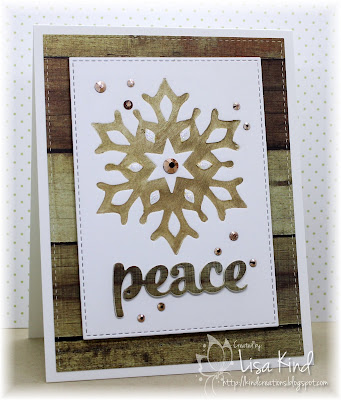 Labels: Christmas, Time Out Challenge, TO

Hi friends!  It's getting closer to Halloween and Maria chose some fun Halloween colors for our Just Us Girls Color Week challenge.  However, these could be used for any card! 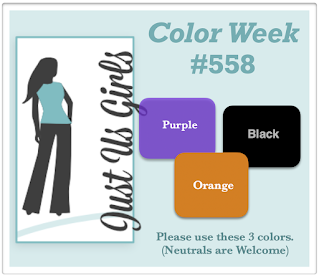 I was going through my fall collection of stamps and found this cutie. It's from La La Land (I'm not sure they are still in business) and the insert had the colored image on it, so it made it easy for me to color the image!  She's colored with copic markers.  Once I finished coloring it, I die cut it with a stitched rectangle.  Then I created a mask for the image.  I laid it on top of it and blended some orchid ink around her.  It looks very faint and sort of blue in the photo, but it's really orchid and looks so pretty.  I stamped the sentiment on it and mounted it on black cardstock then purple gingham.  There is shimmer on parts of her outfit, glossy accents on the lollipop, and purple crystals. 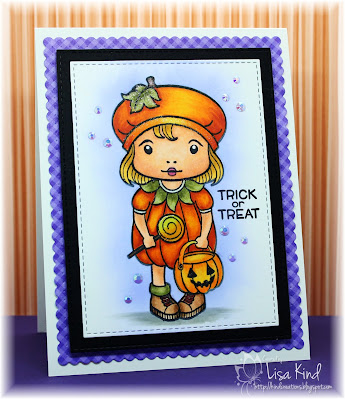 Hi friends!  I'm the hostess over at Just Us Girls this week and I chose the OMBRE trend for our Trend Challenge. 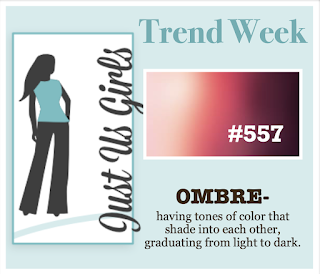 I made another slimline card and channeled Jennifer McGuire once again.  I just love what she does with her techniques.  She recently did this technique in one of her videos called Negative Ink Layering.  What I did here was stamp the image on the cardstock then used the die to cut out a mask from Gina K masking paper.  I placed the mask onto the image, then used three different blue inks to create the ombre look.  Keeping the mask on, I used a leaf stencil and inked through it using the same three blue inks.  That is a little difficult to see.  With the mask still on, I used a small dotted stencil and white ink to ink over the panel.  I took off the mask to reveal the original stamped image. I die cut the sentiment and added the crystals and shimmer to the sentiment.  (I should have added a second smaller sentiment under the word die cut!  I'm going to do that later.) 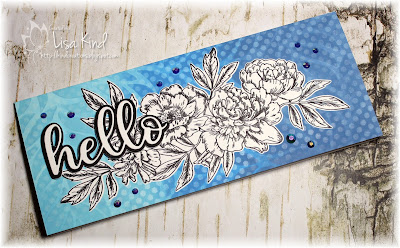 Hey friends it's October!  Summer sure went fast for me.  And because it's October, we all know it's Breast Cancer Awareness month.  The Time Out challenge is celebrating by having it be our theme for this challenge. 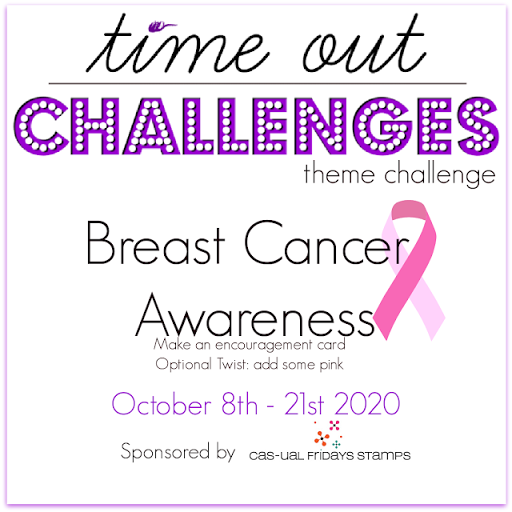 I made a slimline card for this challenge and added pink to my card for the twist part of the challenge.  I stenciled the leaves with yellow and pink inks.  Then I used the coordinating leaf vines stamping them with Versamark ink and embossing them with gold detail powder.  I stamped and embossed the sentiment in the same manner on pink cardstock and die cut it with the coordinating die.  I added some gold crystals for more sparkle.  The matching envelope was made with the same die set used for the scalloped frame.  It's so difficult to photograph this size card.  I can't fit it in my photo tent!  Ugh! 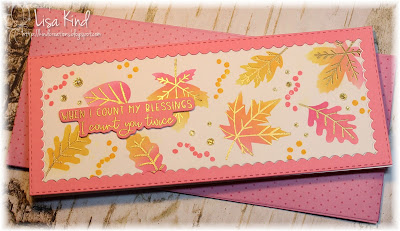 Hi friends!  It's Word Week over at Just Us Girls, and Bobby chose PLAID. 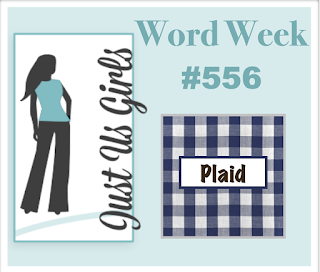 I wanted to make a card for my friend's 10 year old granddaughter who recently broke her wrist riding her bike.  I had this gnome already colored and sitting on my desk, so I chose to use this.  Gwen had her hair in braids the last time I saw her, so I thought it was perfect.  And she has blonde hair!  I recently got this mini slimline card and envelope die set from Trinity Stamps which worked perfectly.  I first stamped the plaid background in orchid ink then die cut the tag from it.  I also die cut the scallop rectangle and adhered the tag to it with craft foam.  The sentiment die was die cut three times and stacked for dimension.  The gnome was adhered with dimensionals.  I added the twine, crystals and star dust stickles to the heart. 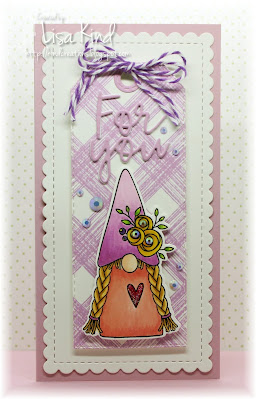 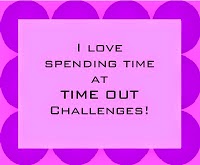 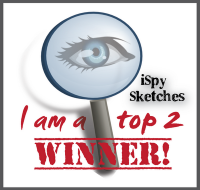